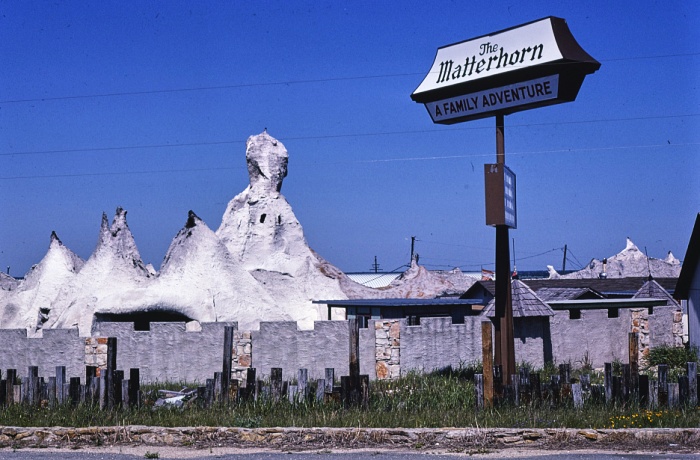 I have a vague memory of visiting a restaurant inside of a mountain as a kid. For a while, I thought it might have been some random dream I mistook for reality, but it turns out this was not so. What I remember was driving a long time to a large fake mountain next to the highway, and then eating inside a large area inside of the mountain that had a pool, waterfalls, slides, and divers as part of a show. Also, I remember there were many back rooms, side caves, rooms hanging from the ceiling, and pretty much a maze of hallways to explore.

Sound like a weird kid dream? Turns out, it is real.

After years of searching for more information, I finally found out that this place was real: The Matterhorn. The Matterhorn was a Bavarian-themed amusement park in Prairie Dell, Texas that operated briefly in the early 1980s right off of the I-35 frontage road. I think I only went at night, as I don’t remember the park part. But apparently this park featured a train ride that went through tunnels, carnival rides (such as a tornado), slides, an inside roller coaster, an indoor roller rink, bumper boats, bounce houses, smaller carnival rides, ponies, a merry-go-round, a fake casino, a health spa, large-screen televisions, an arcade, and a dance floor with live bands on the weekends. As one person remembered it: “It was called the Matterhorn, since the main attraction was a huge fake mountain surrounded by Bavarian style shops. The inside had a waterfall and slide, where for a fee you could swim or just dine in the restaurant while watching professional divers. It also boasted of having the world’s largest indoor roller rink.” As you can see in the picture above, this “large fake mountain” was a replica of the Matterhorn itself.

By the way, fans of horror films might also recognize this place, as the park’s ruins were used for scenes in the 1986 movie Texas Chainsaw Massacre II after the park closed.

It seems that at first The Matterhorn was a success, but that changed fast. Apparently it had wonderful steaks and large crowds at first, but a change in management led to it flopping after only a few years. Kids loved it, of course, but apparently since it did not serve alcohol, adults weren’t as keen on making the drive (Prairie Dell is between Salado and Jarrell in Texas – South of Waco and North of Austin by a good drive from either direction).

Inside of the main Matterhorn was a restaurant in a large room with a large lake. This lake had cliffs around it with performers that would dive and slide into the lake for a dinner show. This is the part I remember. I also remember off to the side of the lake was a maze of dark rooms and caves that you probably weren’t supposed to go into at night, as they were usually abandoned. My brother and I would sneak off into these caves and look around. Eventually we found some stairs that went up to some hanging platforms above a large room that I now assume was either the dance floor or the roller rink (or a room that served as both). We thought it was the coolest thing, because it was actually a series of open platforms with bridges between them hanging from the ceiling like a mixture of tree houses and the Ewok village (without the trees).

Later on, the land became the Emerald Lake RV Park. That is now closed and the land seems to be private property.

It turns out that the Matterhorn was not the beginning of the story. The Matterhorn was created by a Temple, Texas restaurant owner that had previously made his Tex-Mex restaurant look like a cave. Basically, they used a paper mâché or blown-on expandable insulation like material to cover the walls and create a maze-like cavern. At one point the walls were even sprayed over with a layer of plaster and finished with sprinkle glitter. The man’s name was Frank Weis, who along with his wife Susie ran this restaurant, called El Chacho.

El Chacho (at the corner of 3rd and French) was described as a labyrinth that you could easily get lost in. There were different rooms, with different themes. Small gift shops were said to be scattered throughout the caves, complete with a man in a tamale costume that would hand out cheap toys. People remember seeing a toy train going through the restaurant as they got lost. One room had a waterfall. They had a wishing well right inside the front door. They even tried some dinner theater where a singer would go around singing to the guests. Sound familiar?

Part of the popularity was due to the food. People remember the sopapillas being “crazy good.” Many also fondly remember the queso. There was even a buffet on the weekend. The owner was famous for serving all-you-can-eat steaks that were cooked outside on pecan wood. Servers would even give you free cheese slices from a block of cheese while you waited for your table.

The other part of the popularity was the owners. Frank and Susie would pull in teenagers and special abilities kids, becoming like substitute parents to many. Frank was said to have big plans for the teens that worked for him. They even took the staff to Monterrey and Saltillo in Mexico as a thank you for their hard work.

However, it was the unique design that eventually closed the restaurant down (but possibly opened the door for the Matterhorn?). The fake walls and ceilings started to fall apart and land on customers. There were said to be lawsuits from this. All of this led to the restaurant caves being declared fire hazards and the restaurant shutting down. The fire department was worried about people getting lost in the case of an emergency, plus all of the candles on tables in rooms with flammable material falling off the walls was a source of concern as well. There is now a Cefco gas station where the restaurant used to be.

I don’t really know if people open roadside places like the Matterhorn any more. I am a bit too young to know much about Route 66, but the Interstate Highway system I traveled on for family vacations in the 70s and 80s still reflected the distinct influence of the Mother Road. There is a lot about the Route 66 days that fascinate me, especially how people would put together a bunch of cement and cheap building materials to make a “roadside attraction.” You can see by the pictures above and below that these were often not high quality attempts by any stretch. Probably not exactly safe, either. Route 66 is not a popular route anymore, and most of its influence has been removed from the interstate highway system to make way for wider, newer roads. My nostalgia definitely makes me remember these places as being cooler and more realistic than they were. I seem to find that a lot as I dig into the past: what seemed so cool as a kid turned out to be cheap plastic and cardboard (or cement and foam). A metaphor for modern life, or just progress at all costs? Hard to say. 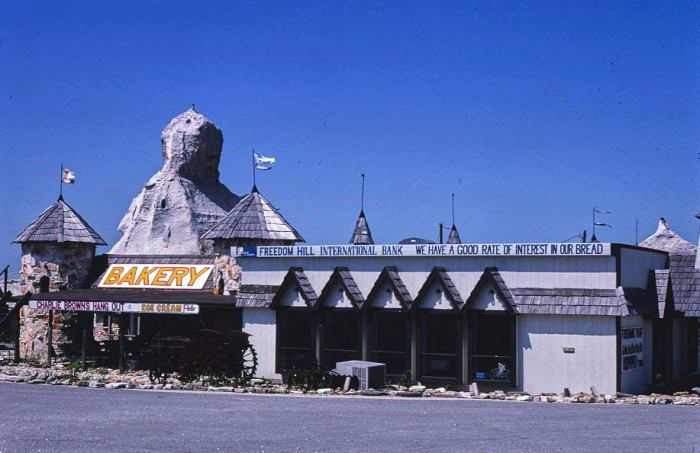