My first encounter with HGTV was a bit of a shock (even though it was a good decade ago). Why are they bringing back the things from the 80s that weren’t a good idea in the first place? Any child of the 80s in America probably remembers their parents spending a lot of time and / or money to decorate their houses in certain ways, only to see them spend a lot more time and / or money removing all of that in the 90s.

Gold hardware? Trust me – don’t go there. It will go out of style again. Fast

White walls and color schemes? It only looks modern” for a little bit?

Wall paper. Ugh, don’t get me started on wall paper.

Except, well… I did get started on wall paper. I remember my parents had a lot of wall paper put up in the kitchen and bathrooms of our ranch house at the beginning of the 1980s. I remember that as a kid I actually liked the wall paper in the hall bathroom. I also remember all the DIY time they spent removing the wall paper in the 90s. To replace it with… faux paint. Well, at least that unfortunate trend is not making a comeback.

Anyways, back to the wall paper I did like as a kid. I remember that it had some cool vintage drawings of huge old sailing ships. I used to love drawing those ships over and over again, sometimes using that bathroom wall paper as a guide. The ships were mixed in with vintage maps of the world that were somewhat – but not fully – accurate. I saw some Fixer Flipper Brothers and Sisters List It show on HGTV that had some sailing ship inspired wall paper and it made me think about that wall paper I loved. So of course, I wondered if I could ever find it online anywhere.

Sure enough, after several dead ends and rabbit trails that shall never be spoken of in public, I did find the exact same pattern we had (on eBay of all places). Just a different color scheme. 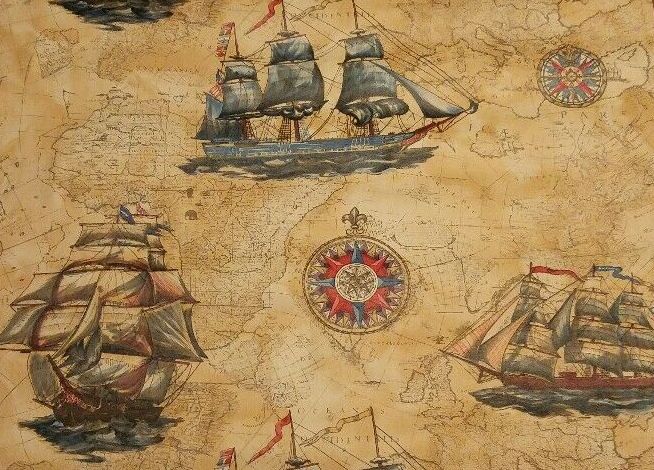 This version has blues and reds, where ours had greens and yellows. And yes, those are just some random “exotic” animals (some not native to the area) added to Africa… just because I guess?

Anyways, needless to say, for the few years that I was into drawing sailing ships, this ship frequently made it into my drawings: 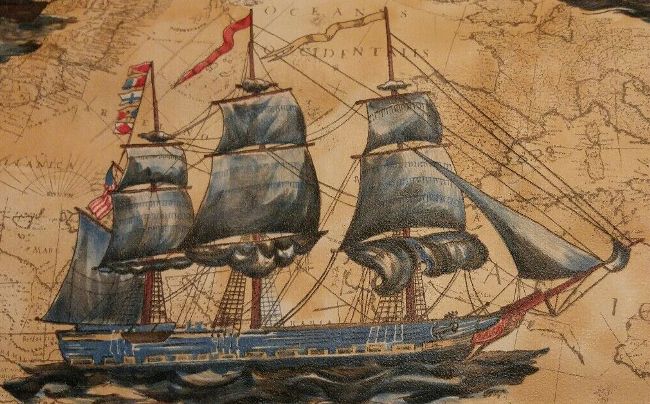 Of course, as a kid they don’t tell you that these ships often carried stolen goods, cultural artifacts, and even people from around the world back to Europe or the U.S. And that even those engaging in legitimate trade were often full of disease and lack of sanitation. We just always thought that ships looked cool, and when you did see them on TV or in the cartoons, they were taking heroes off to some adventure. I probably read C.S. Lewis’ The Voyage of the Dawn Treader a lot during this time as well. So no real deep thoughts here, other than the usual “they didn’t give us the hard truth as kids” point that seems to go along with, well, all of the stuff from our childhood.

And I guess that not all wallpaper (or faux paint for that matter) is bad.