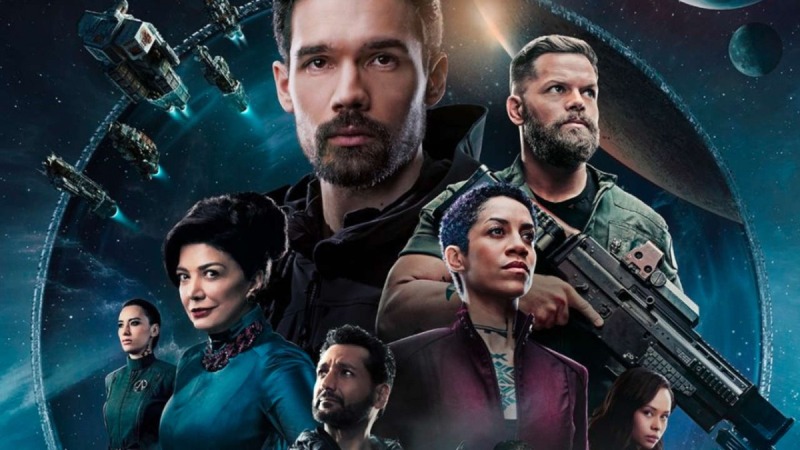 One of the disappointing things I have learned about Science Fiction through the years is that it is more fiction than science. Gravity (or the lack of) is hard to deal with in space. Explosions cause debris that can be destructive. Technology is not this magic cure all for everything. Then you find out that there is an entire sub-genre for Science Fiction that tries to stay grounded in actual science: Hard Science Fiction. While good examples of hard science fiction are less abundant, thankfully we have a current one that most seem to agree is also high quality entertainment: The Expanse.

I didn’t originally start watching The Expanse when it came out – but I kept on hearing so much hype (thanks again, Katrina) that I gave it a try after the third season. I was hooked. The first few episodes use Hard Science Fiction to create realistic problems where the stakes feel real. Let’s face it: sometimes Hard Science Fiction can be a tedious to watch or read. That is probably why it is not more popular. But The Expanse shows that Hard Science Fiction can also be riveting. An explosion in space creates deadly debris for other ships, and that its not just one quick fix to survive. Suspense over whether they will make it or not keep the story moving.

Where the modern remake of Lost in Space stumbles for me is in how they create danger for the characters. New aliens, new rules of science, mistakes made by people just create the same problems over and over again. The Expanse handles this much better, even though it is technically using things like equipment malfunctions and mundane routine tasks gone awry half the time as well. I know – it doesn’t sound logical. But The Expanse makes realistic problems for people to deal with that doesn’t come across as just throwing problems up for the sake of creating problems for another episode.

Of course, it helps that a lot of the problems they utilize are due to the complex political world they have created. The fact that Mars, The (Asteroid) Belt, and the Outer Planets have formed distinct political entities that are now starting to fight each other to gain autonomy is done in a way that feels realistic and familiar to our present problems. Throw in a lot of attention to hard science details about how humans would live on other planets, moons, and asteroids (and the dangers they would face), and it creates a constant series of realistic problems that doesn’t feel forced.

The one place the series does “cheat” a little bit on Science Fiction is in the creation of new space ship technology that allows them to fly faster between planets. However, they do acknowledge there was a long time before this breakthrough happened where space travel took a lot longer (and they made a great episode that looks back at how this break through was achieved). I’m not really sure if this speed increase is even possible in reality, so that is why I kind of call it a “cheat.” Maybe its not – I’m not sure. But they handle it well. They still stick with their own rules on how long travel takes (unlike Game of Thrones) as well as how dangerous that extra speed can be if they push it too fast (unlike Star Trek).

The real strength of The Expanse is in the characters. To call them complex is an understatement. However, you soon find yourself rooting for some of the toughest, most morally gray ones in the bunch once you get to know them: Drummer, Bobby, Christian, Amos, Klaes, Naomi… there are so many great characters (well written and acted) to love for different reasons.

You also can’t help but notice that the show strives for cultural representation as it dives deep into political issues of cultural assimilation. You also see some massive effects of climate change destruction as a background to the settings of the show (illustrated from the beginning of the series by being simulated in the opening credits). They don’t shy away from taking a political stance while still exploring the complexities, problems, and intersections of these stances. Not always perfectly, but I’m glad to see a series that doesn’t shy away from difficult topics just because they are difficult (while not slipping into being controversial just for the sake of being controversial). We need more shows like this in Science Fiction.